⌂
1827 Demarcation of the Fortress of Luxembourg

The post-napoleonic demarcation of the Fortress of Luxembourg was between the Prussian Fortress Government (Festungsgouvernement) and the civil parties (Dutch authorities and residents).

A total of 389 were put in placed, of the 500 ordered, delivered and paid for. When the Limits Commission (Limitationskomission) was dissolved, the unused 111 stones were handed over to the Fortress Government. Markers have the inscription FG: Festungsgrenze (Fortress limit).

Eleven have been located and photographed. Another two are in museums, one in the History Museum of the City of Luxembourg, the other in the Musée Dräi Eechelen (stone to the right) with the label 389 stones marked the boundary between the Prussian and the Dutch territories. Two are visible with Google Street View: 1 2. At least some makers seem to be indicated in the the 1962 cadaster. For example, marker 8 to 10.

The identification numbers have been assigned for this project, they do not have any historical meaning.

The map is the result the Limits Commission established by the Military Commission (Militärkomission) following the decision of the Federal Convention on the 20-07-1825. The total perimeter is 11,817 meters. The polygon has a serie of numbers 1 to 34; there are other maps from this period with the same numbering. No documentation have been found to create a FG markers map.

This is a very poor quality stitching, but no public high quality digitalisation of the map has been found; the map drawing is of very high quality. The map is broken in two pieces and classified as two separated items, though there are three records:

Rayon of the Fortress of Luxembourg 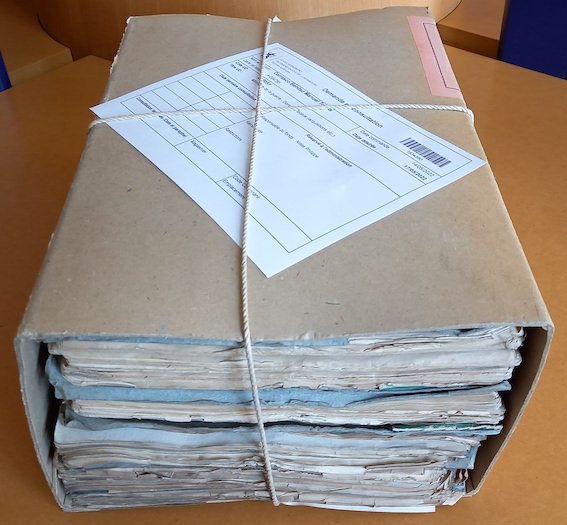